In which the desktop becomes colourful and gimmicky, but maybe in a good way.

Another "hey, cool!" thing that Apple treat as a selling point for OS X is the Dashboard. (And it's another thing that has a similar feature in Vista with the Windows sidebar.)

Hit F12 and all your widgets fly into the screen: 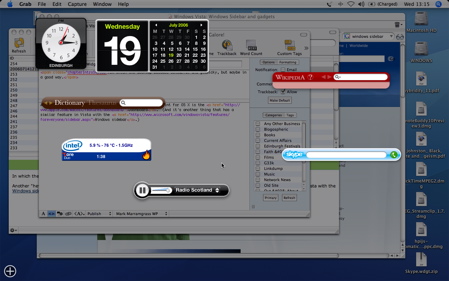 Here I have a clock and calendar, some hardware monitoring software, a hook-in to Skype, access to a dictionary and to Wikipedia, and an internet radio player - usually 'tuned' to BBC Radio Scotland.

I wasn't initially convinced by the Dashboard as a feature, but especially having things like the radio player there in the background but well out of the way until you want them is both handy and quite elegant.

Another winner, I guess.