The sky looked ominous this afternoon, so we did what anyone sensible would do: we loaded the dog into the back of the car and headed out to see what we could see.

By the time we reached Newcastle, the omen had been shown good. It's this kind of downpour that shows one of the essential points of tension between my wife and me, which is to say her deep optimism as contrasted with my usual pessimism. At her suggestion, we kept driving in the hope of coming out the other side of the weather.

By the time we reached the Silent Valley, the rain had stopped. At least, it stopped until we'd paid our £4.50 (eep) and the barrier had come down behind the car - but this perfectly poetic moment was too much for the heavens to resist. Right on cue, downpour once again. 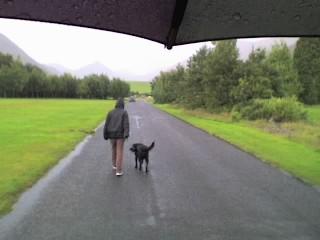 That said, the Silent Valley is a beautiful place with the reservoir hidden in a bowl of Mournes. 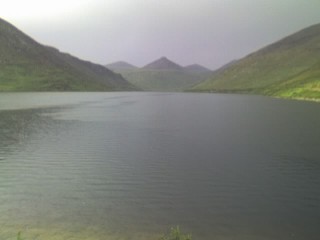 I've only been there once before, when my parents took my brother and me up on what I remember as a blazingly hot summer afternoon several years ago. Contrast indeed. I remembered it as rather great, although under-appreciated by the younger me, and it did appeal to me today. My wife may disagree and tell of the moaning I did about the weather, but it was great. Intriguingly, reservoirs and dams tend to take me that way. I'll have to return sometime with a camera other than the one in my cellphone.

The weather did pick up, with the sun raising steam from the tarmac. But not before we were wet and the dog was wetter. She's sitting here by my feet drying off quietly.