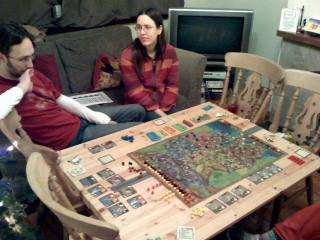 Last weekend we were joined by a couple of friends from Scotland (well, I say 'from Scotland', but one is from much further afield). These are the friends who, a couple of years ago, introduced us to the world of board games that exists way beyond Monopoly — Carcassonne, Ticket To Ride, others.

They brought with them a new one to us (as usual — they regularly introduce us to new games), Power Grid. To play, it's easily the most complex board game I've ever encountered. I'm sure that it's nothing compared to a good RPG or war-game, but I'm still astonished at the detail and complexity that can be achieved with a deck of cards, a beautifully painted playing board and a couple of bags of wooden pieces. The mechanics are quite clever, varying over the course of the game and introducing a nice marketplace dynamic.

All that said, one play through is enough to get the basics and maybe a rough idea of strategy. We played a few times over the weekend, with the games running to somewhere in the region of two and a half hours. Very satisfying.

Power Grid is definitely a step up in complexity from our first foray into the world of German-style games (Carcassonne), and has me wondering keenly what would come next?