Apple announced some new shiny last week. The tech press made a lot of noise, lots of cheering and lots of booing, and people like me got a little excited. I won't lie: I'm really looking forward to getting my hands on an iPad. I no longer have my eye on the Kindle DX. (The iPad has been announced at only $10 more in the States. Mental.)

But I'm also looking forward to seeing what happens when some of the people around me lay hands on one. It seems that this thing will meet the computing needs of an awful lot of people out there — normal people, people not like me, people who don't need the grunt for Photoshop, who don't always have a terminal window open, people who don't self-identify as that kind of geek. Web, email, some word-processing and some presentation prep, games, other bits and pieces. If (admittedly that might be a big ‘if’) the UK pricing is in line with what's been announced for elsewhere, the price is certainly right. It's a little bit more than a netbook, but it looks to fill the same gaps more effectively. It certainly looks like it'll do it much more accessibly.

I couldn't get by with an iPad as my only computer, not by a long way, but I know people who could.

You should go and read a post by Fraser Speirs called Future Shock. Here's a taster:

... For years we've all held to the belief that computing had to be made simpler for the 'average person'. I find it difficult to come to any conclusion other than that we have totally failed in this effort. Secretly, I suspect, we technologists quite liked the idea that Normals would be dependent on us for our technological shamanism. Those incantations that only we can perform to heal their computers, those oracular proclamations that we make over the future and the blessings we bestow on purchasing choices. Ask yourself this: in what other walk of life do grown adults depend on other people to help them buy something? Women often turn to men to help them purchase a car but that's because of the obnoxious misogyny of car dealers, not because ladies worry that the car they buy won't work on their local roads. (Sorry computer/car analogy. My bad.) I'm often saddened by the infantilising effect of high technology on adults. From being in control of their world, they're thrust back to a childish, mediaeval world in which gremlins appear to torment them and disappear at will and against which magic, spells, and the local witch doctor are their only refuges. ...

Another developer, Matt Gemmell, posted these: 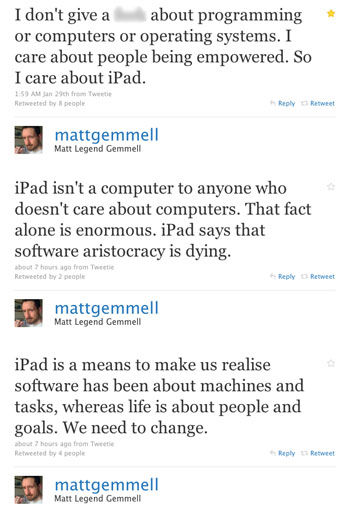 Finally, you should read The Failure of Empathy on the Mule Design blog:

... They [people] want things to work most of the time, and be easy to fix when they don’t. And if the process by which it happens is “magic” they are totally cool with that. They want the thing in the movies. As an industry, we need to understand that not wanting root access doesn’t make you stupid. It simply means you do not want root access. Failing to comprehend this is not only a failure of empathy, but a failure of service.