Last month was November, which seems to have more than its fair share of the modern kind of do-things-for-a-month observances: see NaNoWriMo, NaBloPoMo (perhaps now defunct), Movember, even AcWriMo. And, as I discovered some time in the middle of October, #makevember.

For a bit of background, I've been doing some fiddling lately with basic electronics and Arduinos and other microcontrollers. I spend my days at work writing software, and I've been pining for something a bit more physically creative. Maybe I'm approaching an early(-ish) mid-life crisis, or getting in touch with my own mortality or something. Microcontrollers and bleeps and bloops and lights and whirring motors have cropped up as a way to connect the non-physical nature of software with something that I can touch.

It was while noodling with this stuff that I came across the notion of #makevember, on Dominic Morrow's blog. The friendly and accessible manifesto of "make something you wouldn't normally make, as long as it's fun, with no pressure and shared with kindness" drew me right in.

So, for November, I made random things. Not every day, but enough to get into a bit of a rhythm. Some were ugly failures, some were daft, some were useful, all taught me something and all were fun. My favourites that I produced are:

The best bit of #makevember, though, was watching with wonder all that was posted on the Instagram tag by folks who have much more talent and expertise than I do. I've been able to expand the list of those I follow on Instagram and on Twitter to take in some properly impressive and inspiring makers. I hope to follow this post up with one that includes some links and recommendations of who to follow. In the meantime, I'll be over here with my gradually reducing reluctance to take a screwdriver or multimeter to the things around me.

From the last week or so.

Three short novels (novellas? I'm a bit hazy on where to draw that line):

I accidentally stumbled into reading those three books one after the other. There are threads of genre and theme that run through them and make them even more interesting when put alongside each other. They have three very different styles and push different buttons, and the crime-and-policing-involving-the-supernatural is a favourite sub-genre of mine. These each connect with that in different ways, that I enjoyed.

Politically-speaking, nationally and globally, 2018 was a terrifying shambles. I can’t think of anything sane or useful to say about that that hasn’t been said. Yikes.

I didn’t make as much time to read this year as I normally do, but still read some great fiction. Since I finally owned up to myself a few years ago that I mostly read genre fiction, and that being bothered by that was simple snobbery, the list was mostly SF and fantasy. A handful of titles that stood out for me:

I still fear the day when last.fm goes away. I’m sure it’s bound to. 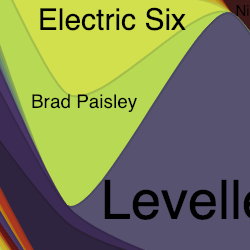 (Click the image for a nice big, wavy graph generated by LastWave.)

Missing from that is the all the time in the car in the first half of the year spent listening to the Hamilton cast recording, but very apparent is how a friend on holiday in the summer reminded my that the Levellers exist and I spent much of the rest of the year listening to their back catalogue on repeat.

2018 is the year we (through a recommendation from another friend) discovered Brooklyn Nine-Nine. Cloak & Dagger reignited my enthusiasm for Marvel TV adaptations. And A Quiet Place was as good as everyone said it was. And I finally made my way through [The Strain](https://en.wikipedia.org/wiki/TheStrain(TV_series)). I’m relieved to report that it is much better executed on TV than in the books.

Last year I took up a new sport, and even joined a club. The idea of me joining a sports club was (is) pretty unexpected, even if the sport involves as much standing in one spot as archery does.

In this part of the country, a lot of the indoor action involves shooting a Portsmouth round, and over the year I’ve taken my average score from mid-480s to mid-520s, with a PB of 533. I’d like to break that magical barrier at 540 by the end of the indoor season in March, but we’ll see how that goes. (540 is a big deal because that’s where the average score per arrow reaches 9.0.)

Archery is a very friendly sport. I’ve shot in several competitions around Yorkshire over the last year, and for a newbie who belonged right at the bottom of the rankings they were still welcoming and great fun. I’m planning more competition in 2019, too.

This has been the year that we go properly settled into life in Leeds, I think. We got moved into our own house and started to make it the home we want. After a few of years marked by exciting changes and moves (Northern Ireland to Toronto! Toronto to Northern Ireland! Northern Ireland to England!), we’ve been able to just be here and live, with the minimum of further change and chaos. It’s been a bit of a relief, to be honest. There is plenty of joy and satisfaction to be found in the normal.

I’ve not really done one of these big annual review blog posts before. And I’m not a fan of New Year’s resolutions or that kind of thing. But there are a small number of things that I’d like to do over the next year.

Tomorrow is a new year.

The purpose of power is to give it away:
This is my truth, tell me yours.
And freedom won't be freedom until poverty is gone.
So, Nye, your dream's alive and strong.

At work we use Buddybuild for continuous integration, running our tests and shipping builds to iTunes Connect for TestFlight. On the whole we've had pretty good experiences with their service. (The only CI service I've used that I like more is Codeship. I love Codeship, but iOS isn't part of their setup. We use their service for all our server code.)

I was recently doing the annual new-Xcode-new-Swift dance, and found that some of our UI tests were failing. These ones were the tests that interact with the iOS on-screen keyboard, and they were failing in a way consistent with the simulator acting as having a hardware keyboard attached—that is, the software keyboard wasn't visible when the tests expected it to be.

After a bit of a chat with Buddybuild support and a bit of digging around with Google, I've added the following to our post-clone build script (buddybuild_postclone.sh):

The first command closes any running simulators in the environment, to make sure that they'll start up again and so let the second command take effect, which writes a defaults key and value to tell the simulator to not use the hardware keyboard.

And now all our UI tests are passing reliably again. Simple, once you know the options are there.